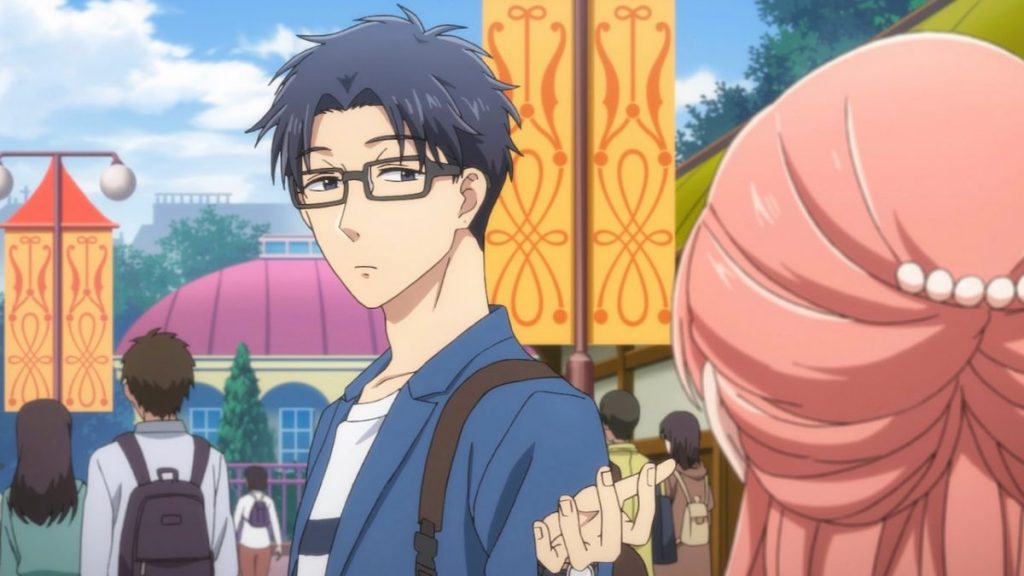 Otaku is traditionally a  word for the supposed misfits who are hardcore gamers, anime watchers, and avid manga readers. However, recently the term has gained more relatability as more people have started identifying with it. The anime WOTAKOI: LOVE IS HARD FOR OTAKU is based on one such love story of a boy, a handsome otaku, and a girl who’s struggling to love his rigid and rock-on-the-outside kind of guy. Love is not a piece of cake and so is displayed by this anime based on a manga of the same name written and illustrated by Fujita. It was released on Pixiv in 2014 and serialized on Comic Pool in 2015. The anime was not released until 2018,  by A-1 Pictures and aired from April 13 to June 22, 2018, on Fuji TV. The series worked under the direction of yoshimasa Hiraike and was produced by Aniplex, Fuji Television, Ichijinsha, Dentsu, Christmas Holly, and Kanetsu Investment. The music composition is done by Akimitsu Honma and the character development is done by Takahiro Yasuda. What makes Wotakoi: Love is Hard for Otaku unique is the target audience it chose. Unlike most love-drama anime, this one aims to make the series more relatable to adults than teenagers, who are often the prime audience for many love-themed amines. It’s remarkable, the animation and character development so far. You might be wondering if there is going to be a season 2 or not and if yes when is it scheduled to be released.

Unfortunately, there has been no announcement about the renewal of Season 2. It is not clear whether the anime is canceled or not but guessing the high ratings we assume that the series will go on. So far the production has used up 4 volumes of the original manga which leaves them with 5-6 more volumes (according to different sources) to work on in the next Season. Certain factors that decide the fate of an anime are its ratings and the money the company earned through it. The ratings of this show are quite impressive for an anime of its genre. It has a 7.5/10 rating on IMDB and 7.95/10 on Myanimelist, with an 81% rating scale otherwise. Considering that the ratings are good enough for season 2, we can expect the authorities to announce its release in the latter half of 2022 or the first half of 2023.

The series is extremely romantic and naive. It follows the story of a girl named Narumi Momose. Narumi has recently changed jobs. She gets late on her first day to the new office but nonetheless, she is excited to leave behind her dark past. But alas! her excitement falls into tiny pieces the moment she realizes that one of her middle school friends also worked at the same place. Baffled and astonished she still tries to keep her secret to themselves by asking him out for a drink but her efforts are futile as this guy still remembers all her interests and her identity as an Otaku and fujoshi.

Otaku like described before is a person who has deep interests in manga and games while fujoshi are specifically girls who are interested in manga and games. Weirdly enough the two-start talking and Narumi tells him about her ex-boyfriend who did not want to date a fujoshi girl which was one of the major reasons why she feared about her true identity of interest getting out. Her middle school friend blurts out that Narumi should date an Otaku, a person like himself. Narumi quickly picks up on the hint and the two-start dating. The animation in season one is so far the best. The storyline is charming and engaging and most of all relatable. we all try to hide our true identities from others while the simplest way is to accept ourselves and look for people who accept us as we are. Even then love might not be as easy as it seems and the same is displayed in this anime series.

Where to Watch Wotakoi: Love Is Hard for Otaku Season 2?

All episodes are available on Amazon Prime Video. do let us know in the comment section what you think of the series!