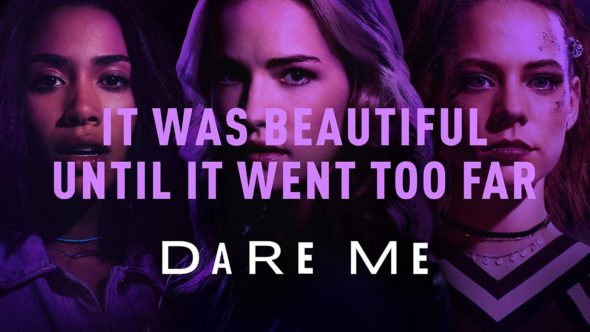 Cheerleaders have always been a big part of American teen drama. The Netflix show Dare Me (2019) is one of them. The show is based on the novel by Megan Abbott. The story revolves around the lives of a few competitive cheerleaders and the turns their lives take as a new coach is assigned to the squad. Even though the show is categorized as a teen drama, the show does not fit into the stereotypical teen drama cliches. The plot involves scandals like cheating, obsessions, and brutal bullying. But what makes this series even more thrilling and dark is the murder. The show features Willa Fitzgerald, Herizen Guardiola, Marlo Kelly, and Zach Roerig. The show was created by Megan Abbott herself. It aired on US networks between 2019 – 2020.

The first season of the show aired on December 29th, 2019, and ended on  March 8th, 2020. The US network discontinued the show a month after concluding the first season. The network hasn’t disclosed any reason behind such an abrupt end. Despite having rights to continue with the series, Netflix has declared that there aren’t any plans about season 2.

Colette French (Willa Fitzgerald) is the new cheerleading coach at Sutton Grove High School, and she is tough on her students. Unsurprisingly, Beth Cassidy (Marlo Kelly) rebels when she is demoted from team captain, whereas Addy Hanlon (Herizen Guardiola) warms up to her new coach and becomes interested in her personal life. When it is revealed that Colette has been cheating on her husband Matt (Rob Heaps) with a local Marine recruiter named Will Mosley (Zach Roerig), the series’ power dynamics shift from episode to episode. In the seventh episode, “Scorched Earth,” Will dies shockingly. As Colette discovers her lover’s dead body and calls Addy for assistance, the series transitions from teen drama to a true-crime thriller. Soon after, Beth realizes that Will was most likely murdered and that Corporal Kurtz (Chris Zylka), a man who sexually assaulted her, may have information about the case. Dare Me season 1 concludes with cryptic narration and no traditional narrative closure, implying that Colette and Matt know the truth about Will’s death.

She is an Australian actress who is best known for her work in Home and Away (1988) and Patricia Moore (2018).

The American actress is known for her role in the Little Women TV series and MTV series Scream.

She is an actress and singer-songwriter from America. The actress featured in The Get Down, Lost  Husband, and Runaway Island.

Zach Roerig as Sarge Will Mosley

American actor recognized for his roles as Casey Hughes on As the World Turns, Hunter Atwood on One Life to Live, and Matt Donovan on The Vampire Diaries.

There is currently no trailer for the second season. But the trailer for the first season of the show is available on Rotten Tomatoes TV’s Youtube channel. The trailer is a perfect depiction of the show’s genre. It is filled with a mixture of suspense and thrill. The most attractive thing about this trailer is the use of colors. It has a perfect balance of cool colors and warm colors. These colors provide an insight into the show’s journey from everything being normal to the places where things start getting darker. The music and voice over is another notable thing about the trailer.

Where To Watch Dare Me?

The first only season of Dare Me is available to watch on Netflix.

In this article:Dare me Season 2, Dare Me Season 2 Release Date