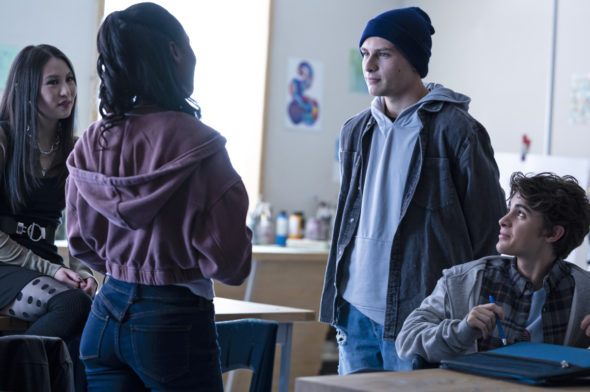 Being an anthological series, the show tells about different occasions in every episode. As the title tells each episode is based on a two-line quote that has an indirect relationship to the portrayed stories. There is no connection between episodes but a genre of horror is strictly maintained.

­The eighth episode of Two Sentence Horror Stories season 3 is scheduled for its release on February 6, 2022. The series distribution license is bagged by Warner Bros. and will be telecasted in The CW network. The time of release is set to be 9:00 pm EST streaming every Sunday. A total of 10 episodes is scheduled for release in this third season. The first two episodes of the season were screened on January 16, 2022, naming them “Crush” and “Plant Life”. The last two episodes of the season were telecasted on January 30, 2022, while the next two episodes were to be screened on January 30, 2022.

The third episode starts with Pete and his four friends in the middle of the woods enjoying their vacation. Pete who is different from his friends frequently gets bullied and pranked. AJ whom Pete considered as his best friend always stands his side when others try to scare him. The same happens when he goes to take a bath outside and his friends shoot that as a prank video. AJ deletes the video and makes Pete comfortable. While everyone was sleeping, Pete commits a scary prank with Wes just for the sake of fun. On the other hand, things get heated between Pete and Wes. AJ is accidentally murdered by Wes when AJ tries to interrupt the fight and put an end to it.

While Pete wanted to confess everything to the cops, Wes along with others voted to hide his body to escape the charges. They failed to escape the woods as the tire got burst after Pete screams seeing AJ open his eyes and Wes losing his control to hit a tree. They decided to bury the body but failed to do it and returned to the truck to see Brendon dead. Slowly one by one everyone dies in the forest and returns to the body as the walking dead. Later Pete finds that AJ was the one who was playing him and even uploaded his prank online. AJ was obsessed with Pete as he didn’t receive the scholarship even though he worked very hard for it.

Sam who had just completed secondary education goes to babysit a girl named Angela. When she enters the house she meets her so-called father and mother and tells them that they are going outside. Angela introduces Sam to her dolls which seemed like torture. Angela invites her to a tea with the dolls where she mixed some drugs. While drinking the first sip Sam knew something was wrong therefore switched the glasses and faked drinking the tea. Suddenly Angela tries some spell consequently, Sam’s eyes turn like a doll’s eye. Then she knew those dolls were people like her who came to babysit Angela.

Sam ran for her life but in the end, reached the same place from where she had started. The dolls inches to kill Sam as per Angela’s command. However, she communicates with a doll named Esme Lopez fixes her hand, and even offers help to other dolls. Suddenly the dolls help Sam escape the house while a scream of Angela is heard in the background.

Pete played by Graham Verchere is the kindest person in the episode. Unlike his friends didn’t have a go-to to any extent behaviors. He simply live by the rules and wanted others not to get hurt. He believed in AJ as his best friend and even lost consciousness when Pete heard AJ was cheating on him.

AJ from the start itself seems to love Pete and have a cool attitude. He even guides Pete not to stay in their company and be a good person. But he had the worst hate of them all for Pete. AJ believes that it was his scholarship that was granted to Pete and he deserved much better. AJ while trying to stop a fight between Jeremy and Pete dies of a severe injury to his neck.

Christina who played Sam was a babysitter who was assigned to look after Angela. Even though she needed the job she tells everyone things that she don’t like. This shows her self-respect and honesty. Sam also expresses empathy by helping the toys to be comfortable amid the cruel contributions of Angela.

Angela is portrayed as a girl who knows black magic and she uses the power to torture his babysitters. She wanted to be the boss and make everyone her slave. In the end, one can understand that it was her house and her parents were her dolls too.

The official trailer of Two Sentence Horror Stories was released on January 7, 2022. The show can be seen on Fubo TV, Netflix and The CW network every Sunday at 9 pm EST and Monday at 7:30 are IST.