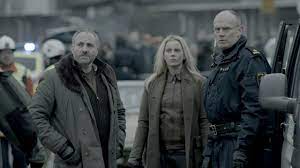 The Bridge (USA) is an adaptation of the original danish-Swedish Scandi-noir genre of film-making with its original’s name as Bron Broen. Various adaptations have been made after the success of the original piece. The American version was released with the cast as follows: Diane Kruger as Det. Sonya Cross: a member of the El Paso Police Department who has undiagnosed Asperger syndrome, Demián Bichir Nájera as Det. Marco Ruiz: a homicide detective for the Policía Estatal (State Police) of the Mexican state of Chihuahua as the two main characters.

The pilot episode of the first season, directed by critically acclaimed Gerardo Naranjo known for his work on Miss Bala, aired in July 2012. Meredith Stiehm and Elwood Reid were the series’ executive producers and head writers while the co-producers were Shine America and FX Productions.

Unfortunately, due to low ratings for Season 1 and 2, the series will probably not see a making of Season 3. As reported by the FX’s Executive Vice President of Communications the series will go off air after Season 2. Though creatively excellent, The Bridge failed to show the same results in terms of ratings. According to the authorities, despite its marvelous cinematography and selection of a unique genre of film-making, there was a major drop in numbers by 42% which might be the cause of this adaptation’s inevitable end.

The opening of the show is marked by the death of an American Judge, whose body is found on the bridge connecting Mexico and the USA. The case instantly becomes big news with the police of both nations working together to solve the mystery. The series displays its use of social-economical presentation of the conditions of difference between the two countries via the famous anti-immigration views of the judge and the choice of its characters.

The Bridge is a masterpiece in the Scandi-noir genre. It is full of brutal crimes, bleak settings, a tortured protagonist, and a strong plot. The protagonist is often played by a woman who breaks the conventional depiction of women as representative of sentiments and social aspects of the series, rather the male is left responsible to depict the sentimental value of the series. What makes The Bridge stands out from other series because of Scndi-noir nature and the use of socio-politically determining motives of killing.

READ MORE: When Will Dare Me Season 2 Release Date Out?

Det. Sonya Cross, played by Diane Kruger, is an officer of the El Paso Police Department. When Sonya was 15, her sister Lisa Cross was killed. Sonya continues to see her sister’s killer, who has brain impairment now, and maintains his drawings on the refrigerator, perhaps to learn why he murdered her sister. Det. Marco Ruiz, played by Demián Bichir, is a homicide investigator with the Chihuahua State Police in Mexico. Lieutenant Hank Wade, played by Ted Levine, is Cross’ boss and a cynical El Paso police officer. He frequently advises Cross to use greater restraint in her unwavering pursuit of the murderer. The character of Charlotte Millwright is played by Annabeth Gish. Her rancher husband passes away in El Paso after suffering a myocardial infarction on the Mexican side of the border. The investigation by Ruiz and Cross swiftly reveals shocking details regarding his cross-border activities. Steven Linder, played by Thomas M. Wright, is a “lone wolf” attempting to survive in an essentially lawless borderland. Daniel Frye, an El Paso Times writer whose once-promising career has been destroyed by a life of partying and substance addiction, is played by Matthew Lillard (season 2; recurring season 1) Adriana Mendez, played by Emily Rios (season 2; recurring season 1), is a young reporter for the Times and a native of Juárez.

The Season 1 trailer was released on 19th June 2014 after completing the filming of the remaining 12 episodes. The directors took a long break after the launch of the first episode in 2012.

Where to Watch The Bridge

Currently, The Bridge is available on Amazon Prime Video, Sundance Now, and Hulu Plus. You can also rent or purchase it at Google Play and Amazon Instant Video.

In this article:The Bridge season #, The Bridge Season 3 Release Date