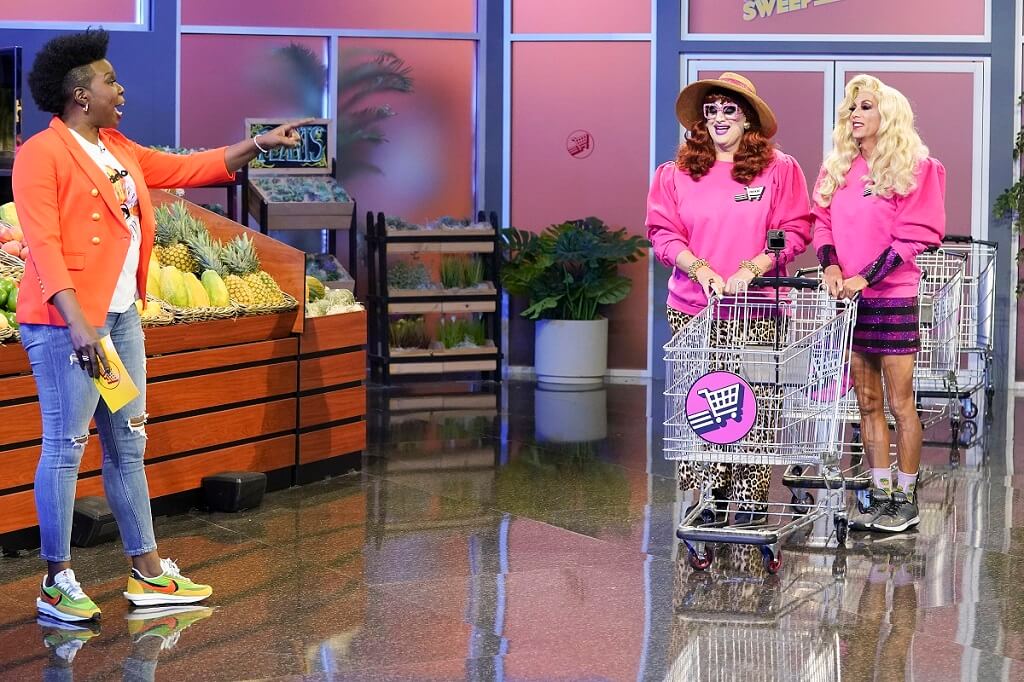 Supermarket Sweep Season 2 Episode 13 Release Date: Supermarket Sweep is an American Television Game Show. The format of the show consists of combining a commonly observed team-based quiz show along with the exciting concept of a live, race against time through a supermarket.

When the time race starts, the teams with shopping carts are followed by cameras through a large vacated supermarket with several sections or aisles. The team with more amount of valuable items in their carts wins. This show was originally aired on ABC from December 20, 1965, to July 14, 1967.

When the original show was aired, it had its shoots mostly around New York City at the Food Fair Supermarkets. A mock supermarket was created for the Lifetime Version at Hollywood Centre Studios. The model, being after a Hughes Family Market.

The current show is a revival of the original format which is being produced by Fremantle and is hosted by Leslie Jones, who also happens to be the executive producer for the show.

Episode 13 has been named ‘280 Pounds of Twisted Steel and Sex appeal’. It is set to be aired on January 30, 2022, on the ABC Network. This Episode would observe contestants from Arizona, Utah, Texas, Nevada, and California (United States of America) competing against each other. The reviews for this episode have not been out yet, neither have the critics rated it. But it will all be out in due time.

Episode 12 of Supermarket Sweep, named ‘Another Man’s Trash is Another Woman’s Treasure’ observed contestants from Florida, Texas, and California (United States of America) competing against each other. The two different teams were Team Fufu and Team Strawberry Jammers. The members of Team Fufu are Edmund Adjei- Baah from Dallas, Texas, and Iniemem Edet from Farmers Branch, Texas. Team Strawberry Jammers included Alyssa Hargreaves from St. Cloud, Florida, and Heather Hargreaves from St. Cloud, Florida too. They competed in the regular format of the show and the team with more valuable items in their cart at the end of the round won.

The various rounds were as follows:-

One member of the team is provided with a list of words and had a time frame of 30 seconds to get their partner to say and guess as many of the possible. Each correct word that matched with the list provided them additional time to Sweep around and gather supplies from the supermarket.

Each member was asked 3 questions related to movies and had a time frame of 10 seconds to answer them. Qualifying contestants earned the right for a ‘Taste Test’. Which if they got right, earned them extra amounts for the big Sweep round.

At the beginning of the first round, a question is asked with a particular product being an answer to it. If the contestants figured it out, they were given 10 seconds to retrieve the product which when done would add extra amounts for the big Sweep round at the end.

This is the final round in which the contestants run around the supermarket with the bonus time they earned in the previous rounds and try their best to get the most valuable items possible within a limited time frame.

The Cast of the show is as follows:

Leslie Jones is the host of the show and an American Actress and comedian. She originates from Memphis, Tennessee, and has been a part of shows like Saturday Night Live, Trainwreck, Sing, Top Five, Lottery Ticket. She has also been a part of movies like Coming to America, Masterminds, and the Angry Birds Movie 2. The controversial reboot of Ghostbusters which came out in 2016 also has her as one of the cast members as Patty Tolan. This movie was directed by Paul Feig.