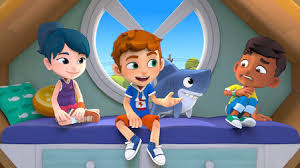 Sharkdog is a CG-animated American television series of shorts produced initially as 9-second 20 episodes series by Nickelodeon. This unique CG-animated series of a 10-year-old boy named Max is created by a Singaporean artist and its present executive producer Jacinth Tan Yi Ting. After its success on Nickelodeon, Sharkdog was then picked by Netflix, Together, Netflix and Nickelodeon have agreed to create animated features and movies that draw their inspiration from existing television series’ characters with 7 minutes 20 episodes, each episode being an amalgamation of 3 stories.

Though it’s too early to say if another season after the second one will be made or not, it sure is a strong possibility given the strong response of its viewers. the IMDb rating is relatively good when compared with other kids’ shows that are brand new and lack deep foundations or roots in the kids’ animation industry, some of which include Phineas and Ferb, Shin-Chan, Doraemon, Pawpatrol, etc. Sharkdog is new and fresh and more relatable to the generations of today because the protagonist Max, though merely a 10-year-old kid is handed the responsibility to take care of his dearest friend Sharkdog. It’s a huge task not only because they are very young but also because Sharkdog possesses powers that could be exploited or misused. In the process of protecting his friend’s identity, Max goes on various adventures which instills in its young watchers, an enthusiasm to explore and be adventurous while staying responsible. With the changing dynamic of today’s generations handling major tasks from a very young age, Sharkdog is a valuable animation to have your kid watch. While Season 2 will be out soon, we hope to receive more of this fun animation in the future.

Season 1 was released on September 3, 2021, gaining an IMDb rating of 6.4/10 and good feedback from critics. The episodes of season 1 were “Fins in the Water”, “Home Sweet Sharkdog”, “Unfetch”, “Sharkdoghouse”, “Sharkdog Digs In”, “The Great Shark Hunter”, “Sharks Sharks Sharks”, “The Fishers Go Fishing”, “Green Around the Gills”, “Poots and Vegetables”, “Dennis Drones On” and the season ended with “Sharkdog, Family”.

The story revolves around a very unique concept of a hybrid of a shark and a dog who is befriended by a ten-year-old boy Max. Sharkdog is unaware of his powers and creates chaos everywhere he goes. This series is a reservoir of lessons on friendships and responsibility, which are very important to inculcate in a child during his formative years. Sharkdog becomes an entertaining medium for kids to learn while enjoying the superfun adventures of Max and Sharkdog.

The first season came to a close with a glimpse of how Mr. Heubel, Dennis, and Captain Quigley banded together to capture Sharkdog, who was present at the carnival. When Max realized what was going on, he hurried to save his best friend but became trapped in the carousel. Authorities at the carnival prevented Sharkdog from being apprehended because he halted at the appropriate moment. Along with his parents, Max departed the carnival with his best friend. We may anticipate seeing some fresh adventures take place in Max and his friend’s life in the upcoming season. Sharkdog is now equipped to deal with challenging situations in the future after realizing his strength and ability.

After the success of Season 1, the second season is soon to be released on 30th June 2022. The trailer has us excited and on the edge for what new is and about to come as the existence and power of the Sharkdog is no longer a secret. Sharkdog’s Official thirty seconds long theme song has been also released on the Official YouTube channel of Netflix Jr.

The voice cast is expected to be the same as season 1 with Liam Mitchell as Max, Dee Bradley Baker as Sharkdog, Kari Wahlgren as Mia, Dennis Aly Mawji as Royce, Judy Alice Lee as Olivia, and Meaghan Davies as Annabelle. Season 2 is expected to have 21 episodes with a special episode included like in Season 1.

Where to Watch Sharkdog?

All episodes of Sharkdog are available with subtitles on Netflix. Season 2 will start streaming on September 30th, 2022. The first two episodes of Season 2 are speculated to air together.