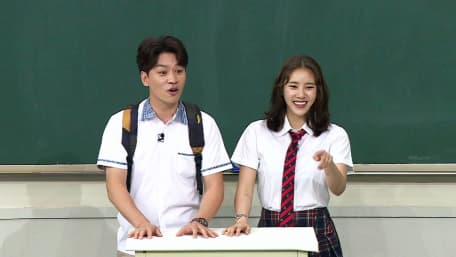 Men On a Mission is a South Korean entertainment program which is originally known as Knowing Bros which has been airing on JBTC since 2015. Netflix recently brought up the show as Men on A Mission and has been trending a lot since then.

Episode 40 for Season 6 will premiere on 28th December 2021 which you can easily watch on Netflix. This episode will be a continuation of the 39th episode which stars the legendary Korean singers Lee Chan- Won and Young Tak who is quite successful and popular among Korean fans. The two popular members and trio of the Korean Pop group Super Junior, Donghae and Eunhyuk will also star in this episode.  There will be a special guest appearance from the famous member of the K-pop group Super Junior, Shin Dong.

About Men On A Mission

Men On A Mission has been a popular and legendary variety show long before it was aired on Netflix. The basic concept of the show is that there is a setup of a high school classroom, where different Korean Pop groups, idols, solo artists or entertainers come as high school students, in the uniform of a student as well.

The celebrities play fun games against each other, showcase their talent or promote their latest albums and works along with sharing fun stories about their lives with the hosts. The hosts of the show are Kang Ho-dong, Lee Soo- Geun, Lee Sang-min, Min Kyung Hoon, Seo Jang- Hoon, and Kim Hee-chul who is the most popular among all the hosts as he is the member of the first generation Korean group Super Junior or SuJu.

Segments Of Men On A Mission

There is a Let’s Play segment where whoever guest comes on that episode, challenges the hosts of the show with a game that he is confident about winning and is strongest in. The guest is required to play that game individually against each member of the cast and win each time.

In South Korean culture, talking in a formal manner with seniors is quite expected from the artists. Thus, the major plus of Men On A Mission is the fact that all the artists are allowed to talk comfortably and informally with everyone around which makes the show feel very honest and free by the standards of Korean Television.

Even the youngest artists of groups speak freely and openly with their senior members which hardly happens in the South Korean entertainment world. Men On A Mission gives us an opportunity to take a glimpse into the lives of our favorite Korean artists, behind the scenes of their lives.

The Best Of Men On A Mission

The episodes featuring popular Korean Pop groups like BTS, Blackpink, Exo, SuperM, Twice, and many more are usually the most successful and watched episodes of Men On A Mission. In the episode where BTS arrived as guests, all the members talked about the differences in their language and accent since they belonged to different areas of South Korea.

The episode featuring the members of EXO is one of the most talked-about and funniest episodes in recent years of Men On A Mission. The members Kai, Chen, Baekhyun, Sehun, Chanyeol, and leader Suho talked about their trainee days and how life has changed in recent years. The game segment called the “Whisper Challenge” has over 40 million views on the Youtube channel of JBTC since it is the funniest and most hilarious game of whisper challenge in history. The members can be seen falling and rolling on the ground with laughter.

All the artists under SM entertainment from all generations have been guests on Men On A Mission like Super Junior, Girls Generation. EXO, SuperM, Red Velvet, Aespa, and solo artists like IU as well. They have talked about the bond within the different groups since they all belong to the same record label and openly discussed their CEO Lee Sooman as well.

The CEO of JYP, JYP himself has come to the show as a guest several times alongside his artists from GOT7, Twice, and Stray Kids. YG artists like G- Dragon, BigBang, Ikon, Winner, etc. have also made appearances. The members have teased and made fun of their CEO on the show openly which tells us why this show is such a hit since it is a rare sight to catch all the top artists from Top companies on a show.