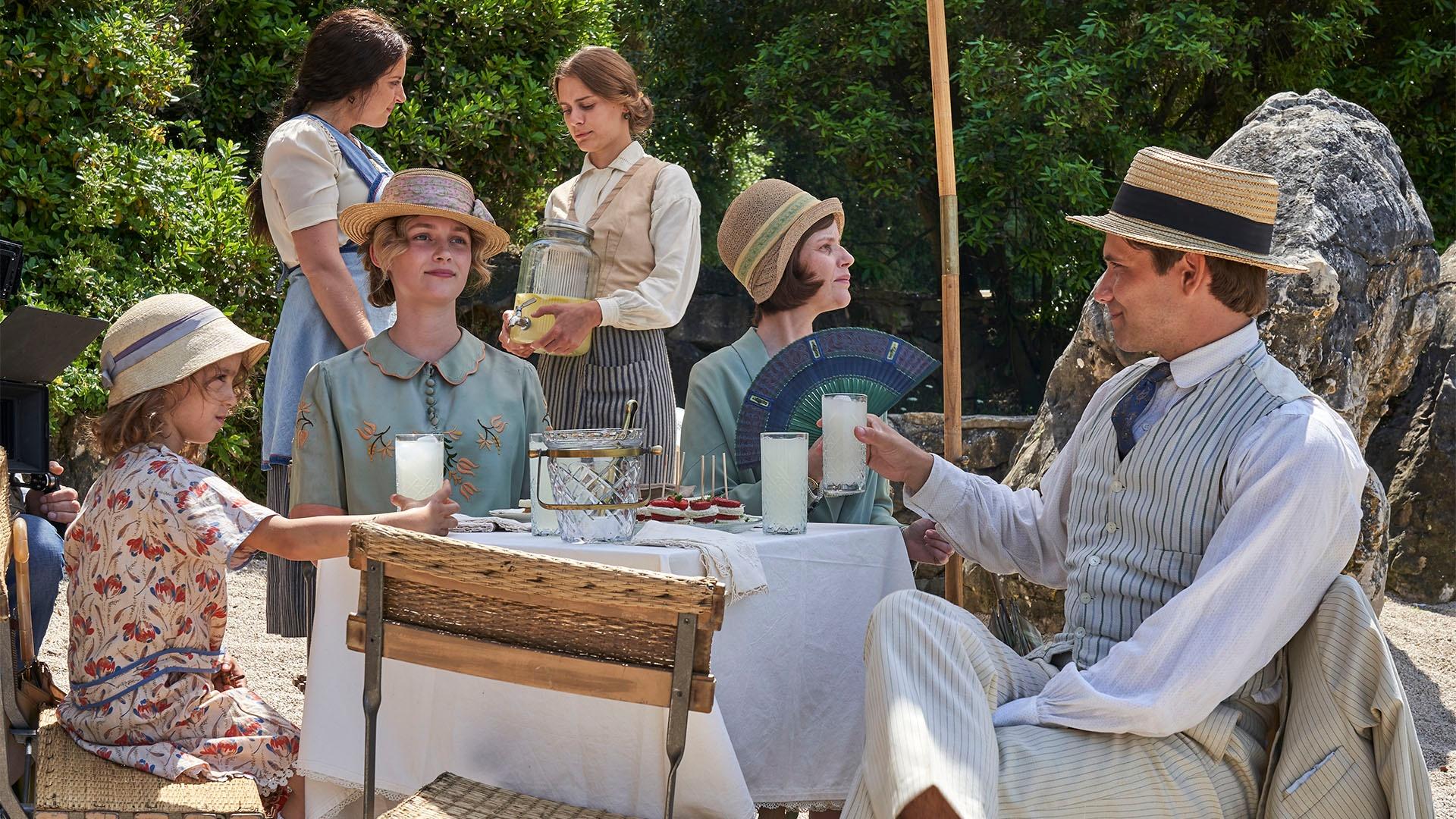 If you are a fan of period dramas, then Hotel Portofino is a must-watch for you. The mini-drama series had won many heart right when it was released and left us wanting more. The beautiful series was created and written by Matt Baker while directed by Adam Wimpenny. Walter Iuzzolino and Jo McGrath were the show’s executive producers, and Julie Bains produced the show. It was exclusively shot in Portofino, Italy, as well as Rijeka, Lovran, and Rovinj, Croatia.

When you think the story is about to take off, it suddenly crashes into a strange, mysterious plot involving one of the many characters and touches on what seemed like necessary taboo topics at the time, such as illegitimacy, homosexuality, infidelity, and domestic violence, in addition to the customary class prejudice and romantic liaisons. Although it may sound strange, the scenery is actually more interesting than the script in some cases. Although it didn’t get off to a great start, each episode got better. The first episode started off a little too slowly because there were so many characters to introduce, but as the series went on, the pace quickened and there were some intriguing themes and plots.

Some might say it’s a cliche, but what does that really mean? The characters are well-developed and compelling, and all the performances are strong. There are common characteristics to be depicted, and this is done with care and in a sincere, heartfelt manner. Melissa was the ideal pre-debutante and the best giggly, silly, endearing girl in a period piece, despite the fact that Cecil is a great cad and has a soft side. Nish and Lucien were both wonderful, and Claudine performed admirably. Everyone stayed true to their characters, which was fantastic. Everyone appeared to be “rather attractive,” and production values were decent. Though critics may disagree, it is undeniably a traditional period show aimed at an older audience. Nevertheless, there is no harm in that. Though it won’t become a classic overnight, this light drama succeeds as advertised in a lovely setting. An entertaining timepiece for chilly winter evenings.

It has been confirmed that Season 2 will start airing very soon, and Matt Baker will serve as both the show’s creator and director once more. The information about the renewal was made public in April. The happy news was revealed by the executive producer, Joe McGrath, who noted that Hotel Portofino was an immediate success with viewers all over the world and that the second season would include a similar heady brew of intrigue, romance, and dangerous ambitions.

The first season had six episodes, each lasting about 55 minutes, and was released on January 27, 2022. Though the exact date regarding the new season premiere has not been announced, it is expected to air at the end of 2023, which is the earliest we can expect it to come. It is also scheduled to have the same number of episodes as the first season. Filming for the second season has also begun. In one of her tweets with the image of “Bella’s balcony,” Natascha McElhone, who plays the title role, wrote, “Here in Croatia shooting Hotel Portofino season 2. Can’t wait for people to see this one. It’s feeling good.”

In contrast to the critics, the audience had a very positive opinion of the show. JP O’Connell’s novelization of Hotel Portofino was released in December 2021 before the Britbox television series premiered.

The Italian Riviera in 1926 is the setting for the historical drama series Hotel Portofino, the time after World War I. The matriarch, Bella Ainsworth’s relocation to Italy, is the subject of the story. Bella has opened a luxurious hotel that she hopes will serve as a home away from home for affluent English visitors. She finds it difficult to handle difficult visitors, a rebellious husband and being threatened with blackmail by the local fascist politician. Bella finds it difficult to run the hotel and take care of her family while her son Lucian still experiences the aftereffects of World War I’s atrocities.

After all the struggles with relationships and money, she finally succeeds in some of the aspects of her life but fails in others. Her marriage is one of them, which at the end of season one, we saw falling apart with no apparent hope of mending.

We are eagerly anticipating the second season of Hotel Portofino because season one left us with many questions about why and what. Even after Cecil’s repeated efforts, we could see that Bell and Cecil’s marriage was about to break up at the end of season one. Cecil tried to make amends for his past misbehaviour by giving her the check he’d just received from selling the fake Rubens his family-owned, but it didn’t go over well. Anish left town for Turin after realizing he could never confess his true feelings to his friend Lucian, while Bella and Cecil’s son Lucian gave in to pressure from their father to wed Rose even though he was actually in love with Constance.

Foxtel Australia reports that in season 2, Bella will face more difficulties as a result of Cecil’s shady business dealings, which may even jeopardize the future of Hotel Portofino. Additionally, the rise of fascism in Italy will continue to be significant. The hotel will also welcome new guests, which could lead to unexpected turns in the Ainsworth family’s story. Season 2 of the series will continue to deliver enthralling tales in a magnificent Italian setting while capturing the long literary tradition of quirky British innocents abroad, as referred to in the series. The historical backdrop of the rise of fascism in Mussolini’s Italy is also revealed, along with a darker plot.

Natascha McElhone is charming as Bella Ainsworth, the hotel proprietress who battles a snobby and controlling husband while attempting to keep the Hotel Portofino open. Anna Chancellor’s charming abilities as Lady Latchmere go unused because she could have been used just, as well as Dame Maggie Smith when she played Violet Crawley, Dowager Countess of Grantham. Her character only appears briefly in the final twist of the plot and has a few odd one-liners. Oliver Dench’s portrayal of Lucian Ainsworth gives the impression that he is continuing his aunt Judi’s thespian legacy. The character he played as the son of Bella and the dreadful Cecil, who teases him about his artistic temperament, was the most well-developed, but even that role fizzled out in the end.

READ MORE: Tales of the Walking Dead Season 2 Release Date: When Is the Zombie Series Returning?

Other characters that are expected to reappear in the new season include – Carolina Gonnelli as Paola; Maya Ramadan as Lottie Mays-Smith; Petar Benčić as Francesco; Dominic Tighe as Pelham Wingfield; Henry Tomlinson as Viscount Heddon; and Bethan Cullinane as Lizzie Wingfield.

There has been no fixed date for the release of season two, just as there has been no trailer released for it yet. We are expecting the trailer for the second season along with its premiere date to be released very soon. We will update this page for you once it happens. If you want to watch the trailer for the first season, it is available on the official YouTube channel of BritBoxUK.

The series’ international distribution is being handled by BetaFilm Group. Season one of Hotel Portofino is available to stream on Amazon Prime Video. The sale of Hotel Portofino to BritBox, ITV, Sky Italia, Foxtel in Australia, and PBS in the United States was announced in June 2021. By October, sales had reached DR in Denmark, Sveriges Television, NRK in Norway, Yle in Finland, Syn in Iceland, and NPO in the Netherlands. Season 2 will be available to stream in the same place when it comes out, including Prime Video.