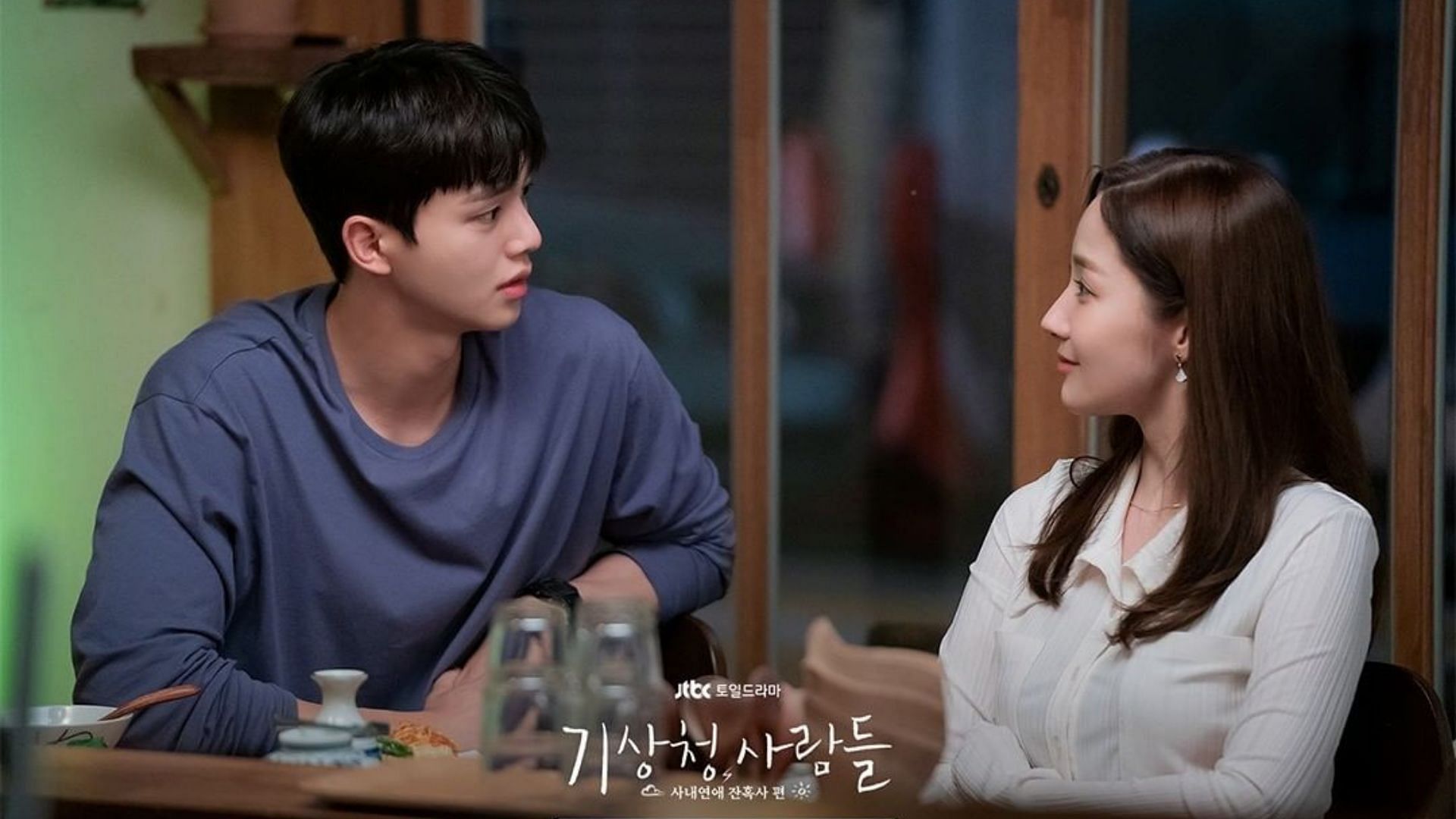 Forecasting Love and Weather also known as Office Romance Cruelty is an ongoing South Korean television series of the romance, comedy, and drama genre. It is directed by Cha Young-hoon with the cast being Park Min-young, Yoon Park, Song Kang, and Yura. The series shows a cheerful yet comical romance between people who work at the Korea Meteorological Bureau along with their everyday struggles together in the office. It was premiered on February 12, 2022, on JTBC and is telecasted every Saturday and Sunday at 10:30 pm KST. It is also available to view on Netflix.

It is a melodrama that depicts the work and life of people working in the Korean Meteorological Bureau. Jin Ha Kyung is a weather forecast reporter who likes to keep her professional and private life separate meanwhile Lee si woo is a special reporter who is known throughout the office for being intelligent and easygoing. Han ki joon is a quick-witted man who is the office’s spokesperson despite that he is someone who has trouble dealing with failure. Chaw yoo jin is a daily weather reporter who despite having to give up on her dream of becoming an on-site reporter is very fond of her current job. The series revolves around these four characters.

The tenth episode of Forecasting Love and Weathering is scheduled for its release on March 13, 2022. The series has aired on February 12, 2022. The production team of Forecasting love and weather has already announced sixteen episodes. Extension for the series will completely depend upon the popularity of the show. The series is expected to end on April 3, 2022.

In the previous episode, Si woo and Ha kyung were in a motel while Dong han was taken to his room to rest. As Si woo starts to explain his reason for staying at the motel, he becomes jealous when recalling that Ha kyung was in the motel with Dong han and starts to wonder why they were together.

The island is experiencing a Heatwave which leaves Si woo in a dangerous position. He is asked to move out of his room because it was being given to a new trainee. Then he meets Ha kyung who asks him to think over their current situation. Si woo lets out his reason for going to the motel. It was to meet his father, who during the flashback is shown as a degenerate man who used his son to earn money.

Sometime after Ha Kyung gets a call from Si woo’s father and asks if she could spare some time. They meet up and he starts to ask what their relationship is and whether they’re together as lovers after which asking more money, as Ha kyung is earning more than Si woo.

Ha kung’s mother falls sick and is rushed to the emergency room and her sister calls her, telling her about how urgent and serious the situation is. However, Ha kyung tells her that she cannot leave work and this infuriates her sister. Dong han offers to help Ha kyung urging her to be with her mother.

Ha kyung learns that her mother fell ill due to the heatwave and is asked to take good care of her. Si woo on the other hand gives his entire savings to his father only to find out that he had talked to Ha kyung. He talks to her and apologizes for his father’s behavior.

A flashback starts showing how Ha kyung’s father commits suicide due to the pressure caused by a failed business. She shares this story with Si woo and asks him to promise her that she has to be the first person to know if he stops loving her. Once he gives her his word, she asks him if they could live together.

Chae Yu jin on the other hand tells Ki jun that she wants to push back the registration of their marriage.

Park Min Young is a South Korean actress contracted by Namoo Actors. She made her debut in a commercial in 2005. In 2010 she rose to fame after acting in the series Sungkyunkwan Scandal.

Song Kang is a South Korean actor contracted by Namoo Actors. He played the main lead of the short series Hello Spring in 2015 and made his major debut in 2017 as a supporting role in the series The liar and His lover.

Yoon Bak is a South Korean actor who is currently contracted with JYP entertainment. He has starred in What happens to my family? And Queen’s flower.

Kim Ah Young, also known by her stage name Yura is a South Korean actress and a singer who is a part of the girl group, Girl’s Day. Yura made her debut as an actress in Sohu TV’s Chinese drama Secret Angel.

Where to Watch Forecasting Love and Weather?

Forecasting love and weather airs every Saturday and Sunday on JTBC at 10:30 pm KST and can be streamed on Netflix.

The Forecasting Love and Weather trailer came out on January 28, 2022. The show is aired on JTBC every Saturday and Sunday at 10:30 p.m. KST