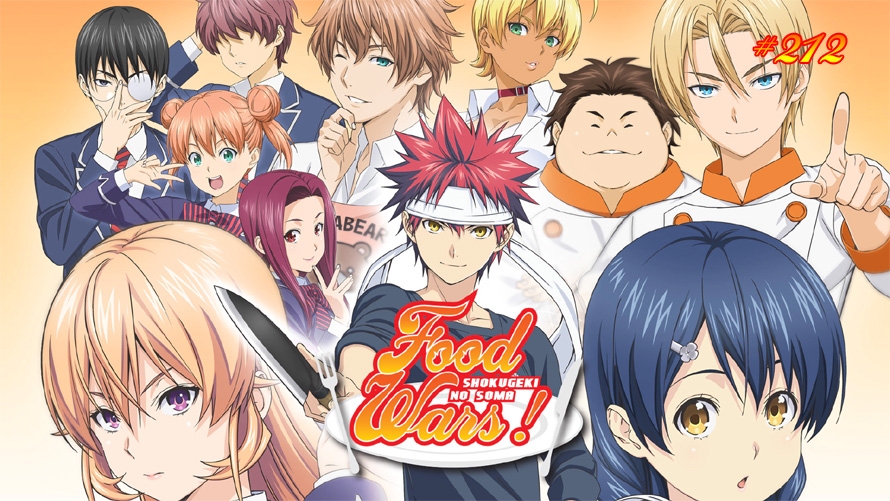 The name itself suggests that the anime has delicacies shown now and then. East Asian cuisine is something that some of us can die for. Right from the Ghibli movies to Makoto Shinkai’s movies, Japanese cuisine has been given an extremely deserving pedestal. What happens when a whole anime incorporates tons of Japanese food and intense cooking competitions within it? I can bet that your stomach grumbled and you felt some adrenaline rush.

Food Wars! is the anime that we will discuss in further detail. It is a Japanese manga series that was written by Yuto Tsukuda and illustrated by Shun Saeki. The manga was published in Shueisha’s Weekly Shonen Jump from November 2012 to June 2019. The chapters of the manga were compiled into 36 volumes.

The manga was adapted into an anime by J.C Staff. Presently, the anime has five seasons which aired from 2015 to 2020. This series also had a pair of video games released in 2015. The manga of the series was a super hit receiving approximately 20 million sales.

The anime revolves around Totsuki Culinary Academy, an elite culinary school in Tokyo, Japan. Only a handful of students can graduate each year from the school. The students mostly come from Totsuki’s Junior High school, but the school accepts transfer students if they pass the entrance test. The students of the school are allowed to initiate Shokugeki- food wars with any other student or alumnus.

Our protagonist, Soma Yukihira, a teenager, who aspires of becoming a full-time chef, is enrolled in Totsuki Culinary Academy by his father Joichiro. The anime encapsulates Soma’s journey in the academy where he has to face various challenges to prove his talent.

It can be said with some confirmation that we will not have any sixth season of Food Wars! The manga of the anime has been adapted completely. In addition to that, the fifth season of the anime was defined as the final season.

After Season 4, the announcement for a fifth season came pretty soon, but since Season 5 in 2020, there has been no news regarding the sixth installment of the anime.

Moreover, the manga of the anime is not an ongoing one. It has finished. Therefore, there is not enough material for a sixth installment of the show. Although there are speculations about the anime returning in the form of OVAs, there is no certainty to that.

As mentioned earlier, there is not enough source material left for the anime to return for a sixth season. This means that if the creators decide to run Season 6 of the show, chances of which are slim to none, a new story that will be a continuation has to be written down. We are not very sure whether that would happen.

Nevertheless, the creators can pick up Soma and Erina’s building romance in an OVA. At least that can be expected. We all love some good romance, don’t we?

Since it is more or less established that Food Wars! will not be returning for another season, we have no characters as such.

We do not have any trailer for Season 6 of Food Wars! because the anime is not likely to return for one. However, there are trailers of the previous seasons available on the internet.

Even if we will not have any sixth installment of the anime, you can watch the previous seasons if you have not.